AZ in the News

(Phoenix Business Journal – February 23, 2021) – Arizona and the rest of the nation are poised for a strong return — after the virus is contained, economist Christopher Thornberg said. Here’s his take on when, and how fast, the state’s economy is expected to recover.

How Arizona universities are meeting demand for skilled talent

(AZBigMedia – February 5, 2021) – We have the sun, the fun, favorite desert escapes, sports teams, amazing restaurants and resorts, innovative career opportunities — and the list of what attracts people to Arizona goes on and on.

The 50 biggest companies in Arizona

(AZBigMedia – February 13, 2021) – If you Google “biggest companies in Arizona,” you’re going to end up with dozens of different lists based on even more sets of criteria. But Zippia compiled a list of the biggest Arizona-based companies and ranked them according to total employee count.

Tech salaries in Phoenix among the fastest growing in the nation, report says

(AZBigMedia – February 23, 2021) – The City of Tempe is expanding its boundaries for the first time since 2006 to annex in a portion of the north Tempe county island.

(Fortune – February 22, 2021) – Semiconductors are used in modern technology the world over—including cars, smartphones, and missiles—but more than half the world’s manufacturing capacity is based in Taiwan and mainland China.

(AZBigMedia – February 18, 2021) – Ten years ago, Arizona struggled under devastating job and revenue losses as one of the hardest-hit states by the Great Recession. Today, Arizona’s economy is diversified, with more jobs in manufacturing than construction, our startup ecosystem is attracting global attention, and our state is competing at the highest level for new jobs and expansions.

(Colliers International in Arizona – February 1, 2021) – Phoenix is quickly moving up to become a top tier market, competing with larger cities for corporate headquarters and attracting more people in our labor force.

Phoenix No. 1 in nation for growth in home values and rent

(AZBigMedia – February 24, 2021) – The Phoenix residential real estate market is booming, recording the highest annual growth in both home values (17.1%) and typical rent (8.4%) among the nation’s largest metros, according to Zillow’s latest market report.

(Arizona Sports 98.7 FM – February 22, 2021) – Yes, it’s time to start looking at playoff tiebreakers. Or, at least acknowledging their existence. I know some of you might be apprehensive, rightfully so, but the Phoenix Suns are a good basketball team. We are in a safe place now!

Here’s where Arizona ranks among best states for retirement

(AZBigMedia – February 23, 2021) – Choosing where to retire is an important decision that directly impacts your financial and mental well-being. You’ll want to consider factors such as cost of living, quality of healthcare, taxes, activities and climate. 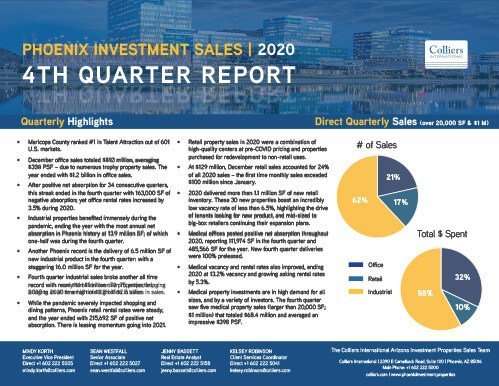 The Colliers International Investment Team provides timely, accurate and comprehensive property and market analysis for office, retail and industrial properties throughout metropolitan Phoenix. Our mission is to inform and educate the buyers and sellers of commercial real estate in the 13th largest metropolitan area in the United States. For custom or submarket-specific analytics and property-level evaluations, please contact any member of our team.